I’m a huge fan of attending small business conferences.  The ability to disconnect from your day-to-day routine to learn and build relationships with colleagues and influencers is always worth the investment, and I recommend adding conferences as a line item in your continuing education budget.   While my must-attend each year is a financial media conference called FinCon, it can seem a bit overwhelming for newbies and introverts, especially since there were 2,000+ attendees at FinCon18 in Orlando.  It can also be physically exhausting with the back-to-back sessions and keynotes, with little time to sleep and exercise if you’re trying to maximize networking opportunities.  Therefore, I was really intrigued when I met the founder of CampFI, Stephen Baughier, at FinCon18 and learned more about his 4 day, 3 night all-inclusive financial retreats, capped at 60 campers.

As I looked into CampFI, I saw that several of my colleagues and friends who I highly respect for their path to financial independence, including J.D. Roth from Get Rich Slowly, Chad Carson from Coach Carson, Doug Norman from The Military Guide, had previously attended or been speakers.  (*Note:  Doug wrote a blog post about how it was worth your time and money here.)  As I looked at the pictures from previous CampFI and saw lots of outdoor pictures, including archery, canoes, and ropes course, I was hooked.  The chance to talk about finances and participate in outdoor activities…seemed more like a vacation than a conference to me!  When the tickets went on sale, I immediately purchased a ticket to attend my first CampFI.

I recently got back from my first CampFI: Southeast.  This was a great experience, and I highly recommend anyone who wants to learn more about financial independence and build meaningful relationships with those who also want to talk about money, happiness, and financial independence to attend a CampFI.  If you want more reasons for why you should attend, here’s a list of the top 15 lessons learned from my first CampFI. 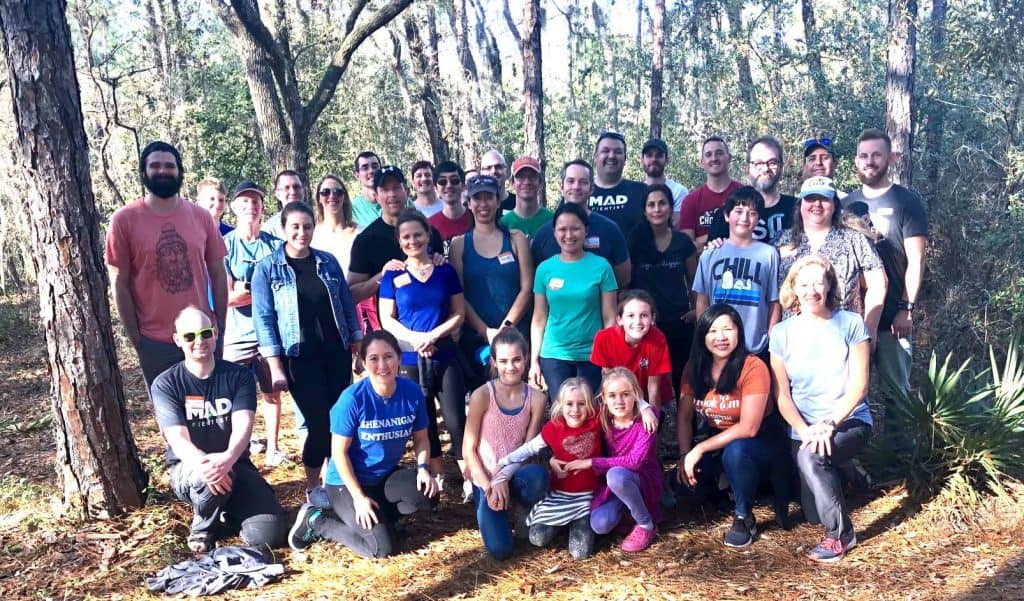 1. Travel Costs – Coordinate your travel schedules with others to decrease your costs, especially if the conference/retreat location isn’t close to the airport. For the Southeast location, just outside of Gainesville, FL, the closest major airport was Jacksonville, which was about 1 hour and 20 minutes away. Uber didn’t seem like a good option, nor did getting my own rental car just to park it onsite for four days seem like a smart money decision. Otherwise, total costs to attend a conference, including flights and transportation to/from the airport and event, can really add up.

3. GPS Failure – Ask for detailed directions ahead of time, especially if cell phone signals aren’t great in the area. Save an offline copy of the map or print a hard copy just in case.

4. All-inclusive – Creating an all-inclusive conference or retreat can remove a huge barrier for participants. Otherwise, costs for attending small business conferences can get expensive if your only options (or quick options before the next speaker) are limited to hotel restaurants and hotel coffee shops.

5. Bigger isn’t always better – Creating a smaller conference with limited capacity can attract participants who get intimated by larger conferences. Stephen limits each CampFI to 60 people, which creates an environment that can be easier to meet and get to know people on a more meaningful level.

6. Mistakes – Joel from FI180 shared in his financial independence talk, “If you save 50%, you can afford to make mistakes.” While he was referring to how he answers people who ask what if he realizes later that he made a mistake in retiring too early, you can also apply this concept to business. If you saved 50% of your net income, you can afford to try out new products or services and test out your business ideas.

7. Worst Case Scenario – Joel from FI180 also said something that really resonated with me. He said, “My worst-case scenario is everybody’s every day scenario.”  Joel was giving advice about not worrying about the worst possible financial scenario and not being able to recover, since that’s what most people deal with daily.

8. Weaknesses – Don’t be afraid to share your weaknesses or information you find embarrassing, especially if it will impact the team’s success.

Example of the human see-saw

9. Failure – “Fail often so you can succeed sooner.” – Tom Kelley.  This is a great quote and lesson for all entrepreneurs. Fail fast, learn and adjust quickly, then try again. If you fail the first time, it doesn’t matter if you learned and can adjust. 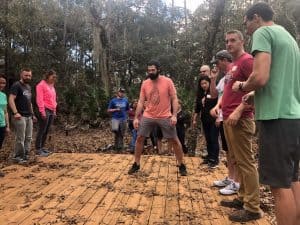 10. Do What Matters – Retiring early isn’t about never working again, but being able to do what matters. 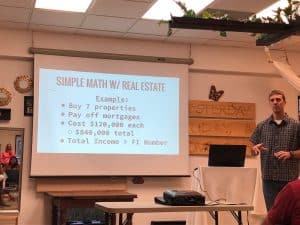 11. Super Powers -Jillian Johnsrud from Montana Money Adventures encouraged everyone to work within your super powers. Beware of promoting employees because he/she did such a good job doing one skill, but in the new position, they will be doing less of that skill and will actually be doing more of “X,” which isn’t in their superpowers.

12. Leverage Others – Don’t feel like you always should re-create the wheel. You can leverage messages and ideas from others, and modify it to make it your own. 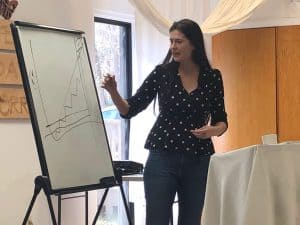 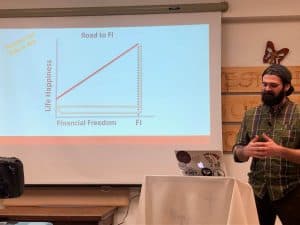 13. Question Your Goals – Don’t be afraid to change courses if you no longer feel passionate about your goals. Nick True from Mapped Out Money, shared during his session how he and his wife did everything that was “expected” of them – got the good grades, went to the good college, got the good degree, had a good job, etc. but they still weren’t happy.  When they started questioning their goals and changing their path, they found what made them happy, improving their relationship at the same time since they were both now doing what they loved. 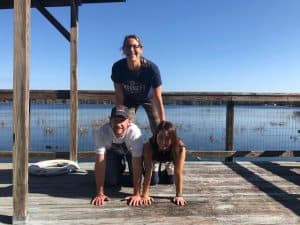 14. Finish Line – Seeing the finish line can give you the boost you need to complete a major task or deadline, especially when you feel like giving up. Therefore, consider creating a detailed checklist, roadmap, or project plan for big goals that you are trying to accomplish for your business, such as publishing a book or launching an online course.

15. Inspiration – Being around other successful entrepreneurs and like-minded individuals can be a great source of inspiration. Also, seeing others accomplish the same dreams that you have can make it seem more feasible and motivate you to act sooner than later.

Summary – Is it Worth Going to CampFI?

For those of you who want to go down the path of financial independence and/or don’t have people in your circle of friends who are comfortable talking about money, this is one conference and retreat that you’ll want to experience. The founder, Stephen Baughier, does an amazing job of balancing the speaker sessions, camper-led breakout sessions based on interested topics (optional), and creating 3 hours of free time and recreation in the daily schedule, including team building ropes course, basketball, walking trails, canoeing, archery, etc.  Check out the upcoming CampFi events here, register, and get ready to be inspired, build life-long friendships, and potentially change your entire course of your financial (and entrepreneurial – blogging/podcasting) future.

If you have any questions about attending a CampFI or what’s the best path to financial independence, leave a comment and I’ll do my best to answer them or point you to the right resources! 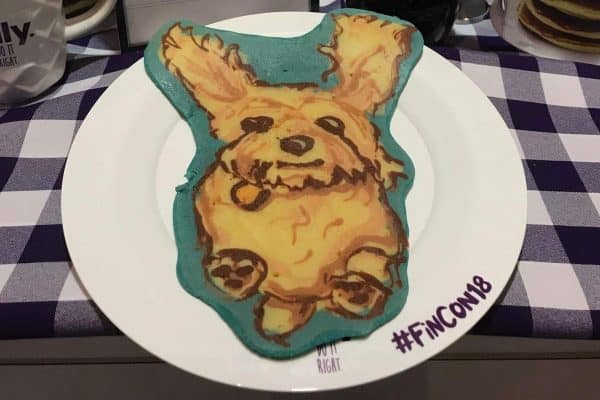 7 Tips Before Investing in Vendor Booths 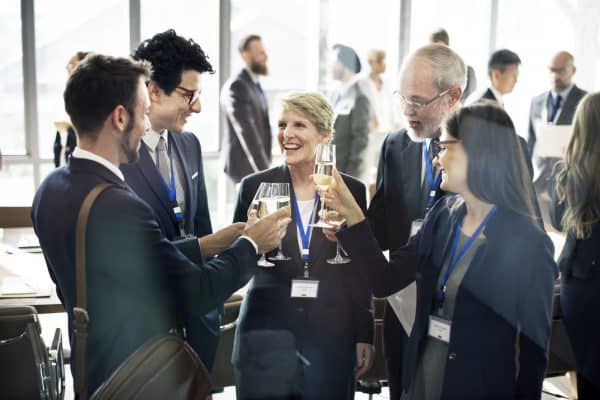 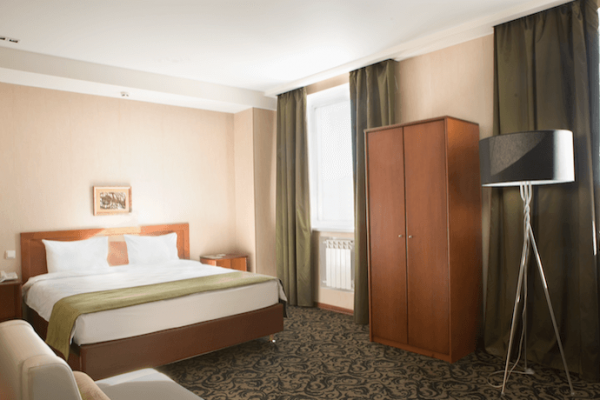 Should You Pay to Stay at Conference Hotel?